How I Told My Daughter The Truth About Santa: A #MomWin Story! 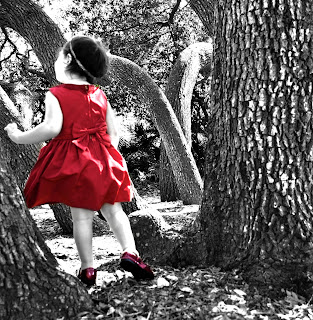 I dreaded it from the beginning.
The soul crushing day, when I would have to tell
my oldest daughter the truth about Santa.

I didn't hesitate to tell my children about Santa.
I loved Santa and it was a fun and magical experience for me as a kid.
When my oldest of three daughters approached me
and started fishing around with questions about Santa, I panicked.
She had just started second grade and, I came to find out later, there was a little boy
spreading the truth around to the Santa Believers.
Kids can be so mean!

The first thing I did was jump on Pinterest and Google.
How did other people approach this?

I soon realized that I just had to do things my way.
I found a cute letter explaining how Santa is just the spirit of Christmas
and that everyone, Mom...Dad...Grandma...Grandpa, was "Santa".
I liked that and used the concept to help me explain things to her.

I knew the question, "Is Santa real?", was coming soon!

I do something with my girls that I will just refer to as "Life Questions Time".
At life questions time I ask my girls, "Do you have any life questions?
Anything that you want to know about or have questions about?
I will tell you the truth no matter what
and you don't have to be embarrassed to ask about anything."
This only happens when I am by myself with one of my girls.
It is my way of keeping communication open and allowing them
to find out the truth about things before or after they hear it from other kids.

It was before Thanksgiving and I took my Oldest daughter out shopping.
She had just turned eight years old.
I did life questions time and it finally happened. She asked,

I was happy that she asked at least a month before Christmas!
I knew she would have some time to process the news without it ruining her Christmas.

After making sure that she wanted to know the answer, I told her the truth.
I told her that Santa was the spirit of Christmas
and now she could help keep the magic alive for her younger sisters.
I did some research on Chris Kringle and told her how the Santa tradition began
and explained about traditions, how they start and that different cultures have different traditions.

She took the news really well!

Later, she told me that it made her sad, but she was happy to know the truth.
We also do the elf on a shelf with our kids, so naturally she asked about that too.
I wanted her to be in on the fun, so I told her the truth.
I let her move our elf on the shelf a few times
and even let her help with Daddy's stocking stuffers, the first year.

Now that she knows, not much has changed!

I still have her write her Santa letters and surprise her with gifts from Santa.
I wink at her when I talk about Santa to her sisters.
It is a special secret that we share during the holidays.
I offered her the job of Santa's helper and she gladly accepted.
This is her second Christmas knowing the truth and she is super excited to help!

To be sure she didn't spread the truth at school,
I told her that other kids would find out the truth when they were ready.
Some kids believe longer than others and it was their parent's job to tell them,
not hers.

Some parent to parent tips, from me to you...

Break the news before December.
Give them time to recover.
Some kids might take the news harder than others, but they will cope!

Don't make Santa go away!
They were raised believing in him. Giving them presents from Santa is ok.
It is still all in good fun, even if they know the truth.
Reassure them that Christmas will still be the same,
they are just in on the secret!

Praise your child
for either being big enough to know or for taking the news so well.
Kids tend to respond well to encouragement!

If your child accuses you of lying, apologize and ask forgiveness.
You did lie after all, but let them know that this was to make the holidays special, not to hurt them.

Know your facts about Christmas!
Who Chris Kringle was. The Birth of Christ and the Christmas Story.
Have something solid they can hang onto after the fantasy is gone.

Don't assume that because you told them about Santa, it automatically includes the Easter Bunny, Tooth Fairy Etc.
I made that mistake!
I asked her to put a dollar under her sisters pillow, assuming she knew...oops!
Had to have another talk!

Overall telling my daughter the truth was a success! One down, two to go!

Thanks for reading! Merry Christmas!