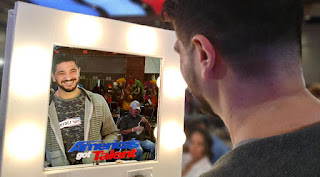 My Husband, Victor, Preparing to go in for his audition!

When my husband heard that America's Got Talent was auditioning in our city, Orlando,
for season 13, he automatically went online and signed up!
The auditions were held at The Orange County Convention Center in

There is no doubt that our family are AGT fans!
We have spent some quality family time watching the show together and
we all have our favorite judges, as many people do!
On a side note, I am a HUGE Tyra Banks fan!

We had planned on bringing all three of our girls with us,
but my six year old got sick that morning, so we just brought our nine year old.
I am glad we left the little ones at home because we were there for
NINE HOURS! 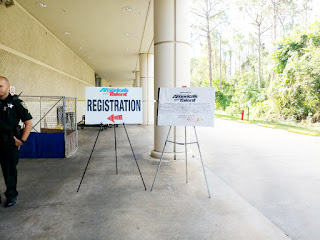 Our journey began when security stopped us inside the convention center and
told us that the line had now formed outside.

The line was fairly long.
We had arrived at about 10:30 am! I can only imagine what it looked like after lunch time!
The first stand-out person we saw was a huge colorful clown!
He let out a ridiculous laugh as he walked past the line with
a camera crew following directly behind him.
My husbands childhood fear is clowns, so he wasn't excited about that! 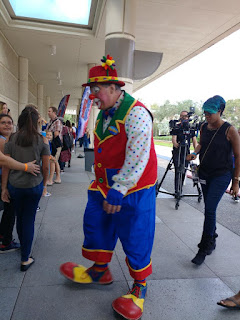 The first clown we spotted!

While in the line outside, they put blue wrist bands on the people auditioning and
orange wristbands on their supporters.
They also passed out the audition number stickers and told everyone not to put them on until registration. I wasn't surprised when I saw a bunch of people with their tags on after they said that! We were good and listened to directions. 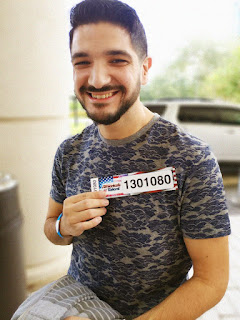 Victor excited to get his number!

We went through security and bag check, into a large room with a huge snaking line. We waited in that line for sooooo long to get to the registration tables! 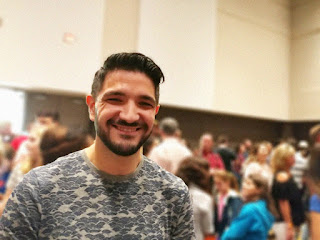 Victor at the back of the line! 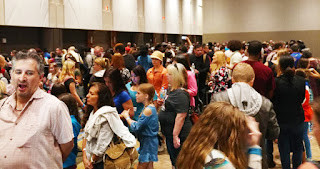 The second line we had to wait in!

We had fun guessing people's acts.
There was a clown, comedian, LOTS of singers and musicians,
dancers, magicians, and even some odd balls! 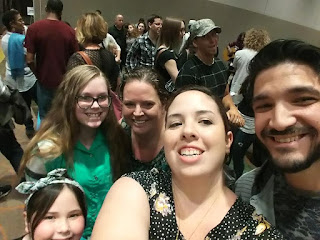 While in line, we met a girl named Hannah and her mom Dawn.
Hannah was singing for her audition. She was 12 years old!
It was so sweet to see how supportive her mom was!

We didn't realize how long we would be standing with them.
Dawn made a point that we were meant to meet each other, and I totally agree!
They found us after Hannah's audition and said she did great!

We were excited when we reached the end of that line!
Being from Orlando and getting the opportunity to go to all the theme parks,
we are very familiar with line manipulation.

If you don't know what line manipulation is...

it's when you get in a line, and it seems like it is shorter than it really is.
Then, you turn a corner and realize that you will be doomed to wait in another line
that you had not anticipated. 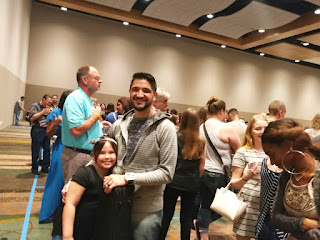 Finally at the "front" of the line!

We turned a corner and got stuck in another line that led to the registration tables.
It was significantly shorter, but

talk about being done standing in line

and then having to stand in another line.
It was totally worth it in the end!

Everything was very organized so I won't complain too much!
We approached a table and talked with a woman to make sure our paperwork was together.
I had forgot my daughters birth certificate, but had a family member text me a photo of it.
She took our IDs and asked a few basic questions.
I thought I filled out the supporter paperwork online, but was told that I had to do it there.

They had extras of all the forms needed
and it was a smooth process!

We registered my husband's audition number, then we got sent to what I called, "The Cool Room"!
Yes, The Cool Room... Don't judge me, I was with my nine year old! 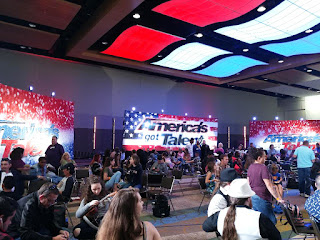 If you have watched the show then you know what room this is.
It's the room that they film the people waiting for the auditions, practicing, and freshening up in those mirrors with the lights all around them!
The room with the dance floor for people to practice!

Yep THAT room. I was in total awe.

It turned out that they really didn't want people practicing in that room.
They explained that if they used the sound from the footage,
they wouldn't be able to edit out anyone that was being too loud.
People were upset, but hello people!

I felt bad for the crew member that had to tell everyone to be quiet.
I overheard him saying over his two way radio,
"I'm telling people to be quiet for filming. I'm really popular right now!"
He was really nice about it though. I heard him tell someone,

They called numbers, about 100 at a time, to go to the next waiting area for auditions.
They did it over a loud speaker so that everyone could hear and
also posted the last numbers called at the front of the room,
just in case someone missed the announcement.
We had a while to go so we explored and then found a seat close to a mirror
because that was really the only place that had an outlet to charge your phone!
There were food vendors and we got something to eat! 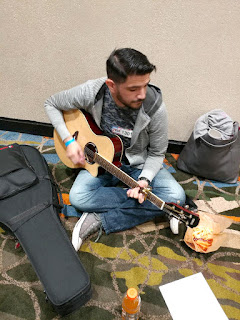 Victor quietly practicing outside the main room!
We were there for about an hour before we started seeing cameras everywhere!
It seemed like they were following the interesting looking groups and people.
They were filming a magician, samba dancers, a dance team, a kids dance team,
a clown, a Hawaiian dance group, a pole dancer.
Think of all the interesting acts you see during auditions on the T.V. show
and that is what they filmed.
It is a T.V. show after all.
I was hoping that they would film my husband, but they didn't.
It was very fun watching and there were a couple times when the producers
got the whole room involved in a shot or two! 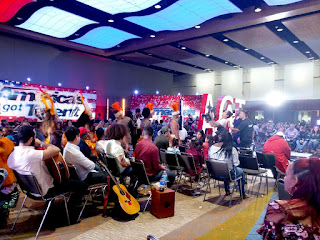 Finally, my husbands number was called!!!
We went out in the hall where there was a much smaller waiting area.
The supporters weren't allowed to wait in this area, unless the person auditioning was a minor.

We were split up!

I so badly wanted to hear my husband audition,
but understood that the less people in the room, the better. 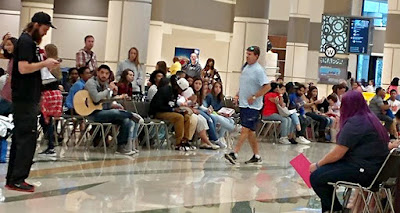 Second waiting area. Victor waiting to be called in for his audition!

They grouped people into small groups of about 14 and
called them to sit in chairs lined up in front of the audition room!
My husband was so close!
He was nervous, but we had been there for about 8 hours at that point and
his nerves had worn off after seeing and hearing some of his competition!

Just when we thought he was almost done...

my husband was told that the producers were going to go on a 20 minute break!
We had been there so long that it didn't even matter anymore.
I figured it was a good thing that they had a break before listening to my husband perform. 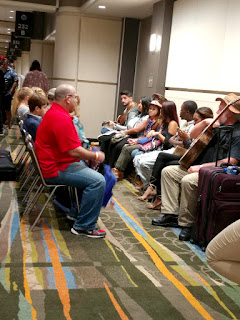 While waiting, my daughter and I went back in "The Cool Room" and messed around,
took pictures, and just had fun enjoying the experience together!

We were able to text my husband back and forth while he was still waiting.
I sent him some encouraging words and his lyrics,
just in case he froze up right before auditioning. 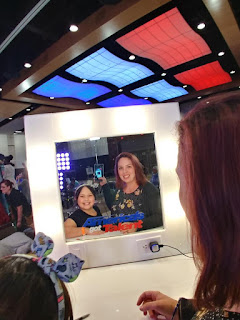 My daughter and I just hanging out, charging my phone!

He finally went in with his small group.
He told me that there were

two producers, a camera team, a couple of crew members, and the group people that sat outside the door with him,

in the room when he auditioned.
Not too many people, but more than he had anticipated.
Having a small group eased his mind a bit, because he has performed
in front of many more people in the past.

He said he nailed his audition and was super excited!
My husband has an amazing voice and it would mean so much for him to be "discovered". 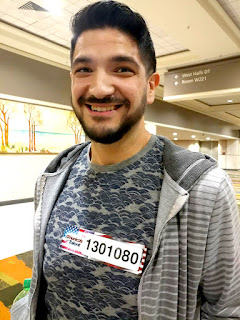 The look of Relief, Excitement, and Exhaustion!

He was told, that if he made call backs, he would get a call from a producer by February.
They would only call if he made it.

You better believe that we are anticipating that phone call!!!

So there it is, our experience with the auditions for America's Got Talent Season 13!

Good luck to EVERYONE who is auditioning,
but just know that...

Orlando brought on the competition!