Confessions of a Female Nerd #2: I Heart Zombies! 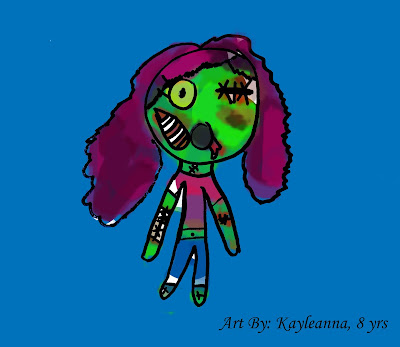 I'm trying to think of my first experience with zombies.
For as long as I can remember I loved Special effects makeup.
Almost every Halloween I was a 'Dead' something.

I never did the skimpy Halloween costumes.
I always had a gnarly gash or two.
Liquid latex, toilet paper, and corn syrup with red food coloring were my go to supplies!
(Maybe there will be a tutorial for that one coming soon!)

Not the movies... the original video game.
You know, the one in the mansion made in 1996.
It was so fun, cheesy, and a bit scary.
My husband and I used to play in our apartment on our plasma T.V.

No kids and lots of spare time!

Most of the time I would watch my husband play.
I will admit, I have never been skilled with video games,
unless it is Pack-Man, Peggle, or Tetris!

That was just the beginning. Then came all the movies!


Some of my favorite Pre-"The Walking Dead" movies are:

I know I missed a bunch, but that just gives you an idea of what I'm talking about.
Some may think Zombies are evil and why would a mother of 3 be so interested?
Think of all those people who had to sit through hours of makeup everyday and the awesome artists who created the zombies. It's really amazing!
I like to look at the different type of zombies that people come up with.


Now for "The Walking Dead"... I love it!
No type of person is excluded from being a zombie in this show!
Zombies are every age, size, and ethnicity. And the makeup is always amazing!
I always enjoy seeing all the different type of zombies they come up with, not to mention all of the different ways to kill them. Sounds terrible, but every time I watch the show there is a new demise for those poor zombies!
I love that almost every colony the main characters come into contact with,
have a different name for the Zombies.
Just to name a few:
-Walkers
-Biters
-Skin Eater
-Rotter
-Lurker
-Lamebrains
-Creeper

That show is just good! I will throw "Fear of the Walking Dead" into the mix of good shows as well.

I guess what I am trying to say is...
I am a mom of 3, 30 years old, and I am borderline obsessed with Zombies/ Zombie makeup!

Take my list of movies as my suggestions or a starting place for zombie research! There is so much zombie stuff out there!

Confessions of a female nerd #3 in the works... stay tuned!