So yes, I am choosing a tough subject this time.
It is something that I have gone through and the memories of this experience
come back to me every now and then.
This is going to be a long one folks!

I can't remember exactly what forms I was filling out,
but there was a question.
How many pregnancies?
The number of children was the following question.

Ugh... 4 pregnancies...3 kids.
I really wish that I didn't have a miscarriage, but that's the reality.

Now, I'm not writing this to get sympathy. Just putting it out there
in hopes that maybe someone who needs it will read it.

I had a Blighted Ovum also known as a
an-embryonic pregnancy.
This happens when a fertilized egg attaches to the uterine wall,
but the embryo does not develop.

THIS IS MY EXPERIENCE.

My husband and I were trying to conceive. There was no question about that.
Ovulation monitoring and calendars, the whole 9 yards!
I woke up one morning with sore breasts and morning sickness.
Having 2 kids already, I knew exactly what that meant.
We were pregnant!!!

I went to the store and got two pregnancy tests and sure enough...
POSITIVE!
We were super thrilled. Maybe the boy this time??? (We had two girls)

We made a rookie mistake...
I filmed a short video of my girls.
It said that they had a secret...Mommy is having a baby!
and we sent it to everyone. We posted it on
social media before our first trip to the doctor.

Honestly I didn't even think anything could go wrong with my pregnancy.
That thought never crossed my mind.
I was healthy and never had any complications with anything in the past.
I did realize that I felt REALLY sick in the mornings.
More than my previous pregnancies.
I just thought what everyone tells you...
Every Pregnancy is different.

I found a new doctor because my previous one had stopped practicing.
I was pretty sure I was 8 weeks along when we went for my initial exam.
We later found out that I was right.
I asked him to prescribe something for my morning sickness and
he sent us off to get a ultra sound to verify how far along I was.
We had my 5 and 2 year old daughters with us.
Everyone was going to see the baby and hear it's heart beat!

We all crammed in the room watching a screen that was mounted in the left corner.
First they checked my ovaries and a few other routine checks.
"Now lets see that baby!"
The nurse was silent.
My husband and kids were confused, as was I.

Where is my baby?
There was a womb.... an empty womb.
The nurse informed us that she couldn't give out any information
and contacted the doctor, who had us promptly come back to his office.
I was beyond confused and scared.
What does this mean?!?!

We dropped off my kids with my parents.
My husband and I drove to the doctor, who was about 20 minutes away,
in SILENCE.
Getting there the doctor said told me that I had something called a
blighted ovum.
He went on to explain that the fertilized egg implanted itself and
for an unknown reason, it never fully developed.

"You are the second couple I had to deliver bad news to this week, after just meeting you."

Maybe the doctor thought that statement would help.
It didn't.
I asked him to put it in simple terms for me.
I was still trying to grasp my new reality.
"Basically your body is pregnant, but your baby did not form into an embryo."
Whoa...
The doctor gave me some options. He told me that I would continue having pregnancy symptoms until I had a natural miscarriage, or I could have a procedure done called a
D and C or a Dilation and Curettage.
This is a surgical procedure in which the cervix is dilated so that the uterine lining can be scraped with a curette (spoon-shaped instrument) to remove abnormal tissues.
Abnormal tissues...AKA my empty womb.

I choose to have a natural miscarriage.
That was probably the hardest thing I have ever done!
I still had morning sickness EVERY MORNING. My breast were still sore.
A daily reminder of something that wasn't there.
That nothing that I had sang to and talked to for a month and a half.
That's what it was... A NOTHING!

I researched, the best I could, what a miscarriage was like.
It could come at anytime and sounded painful.
I dreaded it every day for a month.

Meanwhile, I had joined a club I had never wanted to be in.
The miscarriage club.
I am not calling it that to be insensitive.
In my church there are a few women that had miscarriages.
If any of you ladies are reading this,
don't take this the wrong way, to some extent it was comforting.
It's good to be in the presence of people who have been through similar situations.
One woman told me...

"Just because they say it is not there,
doesn't make it hurts less."

Truth right there.
Still I dreaded going to church, and dreaded talking about what I was going through,
while I was still going through it.
We even had a family road trip and I really had a blast,
but at night in the hotel room when everything slowed down
I thought, "is it going to be today?" and in all honesty I was scared.

I was still pregnant!!!
My body did not want to let this one go. I still had full on pregnancy symptoms.
I went through my whole first trimester. 3 months...
A little over a month knowing that I had an empty womb.
It may not seem like much, but it was probably the longest month of my life!

I couldn't do it anymore.

I can't explain the heartbreak being pregnant with no child feels like.
Just imagine finding out terrible news and wanting to move on,
but you can't because you are reminded daily, even hourly, of that news.
I was literally going through a pregnancy with no outcome and
I pretty much gave up relying on my body to take care of it.

I contacted the doctor to get a D and C.
Yet another less than pleasant experience to add to my story.

I arrived at the clinic for the procedure. I couldn't help looking around the room and wondering if anyone else was getting the same thing done.
I paid for the procedure and got in my gown, my supportive husband by my side.
This might sound crazy, but I felt like I was going in for an abortion.
I was still pregnant!
These thoughts ran through my head.
Maybe there is still a baby in there
and I didn't give it the chance it needed to grow.
Maybe I am actually aborting it.
What if it is still in there and the ultra sound was wrong!?!

Despite all these things running through my head,
I knew that I was trying to hold on to the idea of having a baby
instead of coming to terms with my reality.

My doctor was late for the procedure. I got all drugged up and they wheeled me back into a small room with a metal table. The walls in the hall outside the room were plain white brick. It didn't feel like a hospital or a clinic, rather a back room. At that point I was pretty drugged, so who knows what I really saw.
I blacked out and when I woke up it was over.

A few days later all my symptoms went away and I was happy that I took matters into my own hands and ended this nightmare.
The mental recovery began.
I researched so much during the month after my pregnancy was over. I found that I could only get bits and pieces of information from random blog posts and Answer boards.
I really wish someone had written a post similar to this,
hence the reason I am writing it today.
I found tons of stuff on miscarriages, but not much on blighted ovum.

Am I grieving the death of a child?
I had so many discussions with my husband about this.
I wrestled with this question for probably a year after everything was over.
My husband promptly decided that he was not grieving a dead child because it did not form.
I am not saying that what I think is "the right way".
Just know that these are my thoughts.
I grieved the child I almost had.
I had a deep feeling of loss.
I cannot compare this feeling to others that have had still born babies
or other types of miscarriages because I was not in those situations.

I actually felt like I had to defend my feelings because I thought others would think it was silly.

The Rainbow after the storm 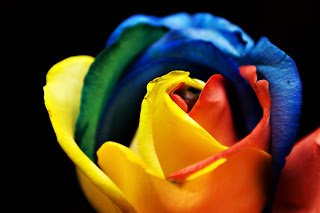 Two and a half months later I became pregnant with our third daughter!
I had heard the term
RAINBOW BABY
I thought that it didn't apply to my situation.
Then there I was Googling silly things like,
"What kind of miscarriage do you have to have to call your next child a rainbow baby?"

I think it's silly now, but I thought that because my baby didn't
form, this didn't apply to me.
I came to a conclusion.
My little girl (now 2 years old)
IS MY RAINBOW BABY!
She made her debut after a storm in my life, just as a Rainbow appears after a storm.

My hopes in writing about all of this is that I might help someone that is in the same situation I was in OR to encourage others to open up about their experience with miscarriage and loss. It is ok to be vulnerable and open up every now and then!

I leave you all with this for now.
Something that I always think about in hard times.

God Never Gives You More Than You Can Handle!

That means there are some really strong women out there!!!